Police in Osun State have embarked on public sensitization and enforcement of COVID19 safety protocols towards curbing spread of the second wave of the pandemic.

Led by the State Commissioner of police, CP Olawale Olokode, officers of the Osun State command moved round some strategic areas of the capital city where they addressed and sensitized commuters, drivers and other residents on the need to maintain total compliance to all Covid19 preventive measures.

Addressing Journalists, CP Olokode said the exercise is being carried out as a reminder for the public to glue to all safety protocols in order to curb the spread of the second wave of the virus which he noted residents are no longer taking serious. 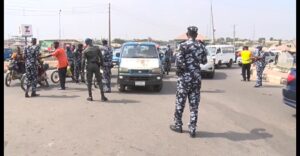 The CP noted that the exercise became necessary to prevent loss of lives or anything that would force the government to pronounce lockdown as witnessed during the first wave.

He said the command would continue to support government in its efforts to contain the pandemic.

Some residents, Mayowa Saheed and Mustapha Adegboyega lauded the sensitization and enforcement exercise by the police saying, it is in the interest of the people.

They admonished fellow citizens not to underestimate the scourge until the curve of the pandemic is completely flattened.

The CP, also visited some mosques to sensitise worshippers of why they should always observe COVID 19 safety protocols.

Back to Top
Close

Your password reset link appears to be invalid or expired.

To use social login you have to agree with the storage and handling of your data by this website. %privacy_policy%

Hey Friend! Before You Go…

Get the best viral stories straight into your inbox before everyone else!

Don't miss out on new posts!